Ghostly Encounters: My Experience with Chloe

Ghostly Encounters: My experience with Chloe at the Myrtles Plantation 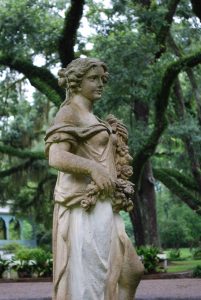 The Myrtles Plantation outside of St. Francisville, about thirty miles north of Baton Rouge, is considered to be the most haunted house in Louisiana, if not the entire country.

The house has a violent past, and it is reported that ten murders have occurred on the property. The first part of the house was built in 1796, and predates the antebellum era. Additions occurred in the early nineteenth century, but the house retains a Gothic feel. It sits amidst moss-draped oaks on the gentle rise of ancient Indian graves.

The Myrtles became famous in 2002, when Unsolved Mysteries aired a segment on it. Several other television shows followed, and it is rumored that Oprah Winfrey’s crew visited, planning to stay the night, as the house functions as a bed and breakfast, but one of her producers felt a chill presence in an upstairs bedroom and was so spooked the entire crew fled. I don’t know if this story is true, but it certainly is believable.

One thing is certain. Paranormal activity abounds in the house. Coming up the drive, the grounds look tranquil, but the house sits in shadow and the energy is odd, almost electric. Knowing the history of the house, it feels as though the spirits are watching you.

Purported haunting includes that of a Confederate soldier who died on the property, as well as that of William Winters, a lawyer who occupied the house in 1871. He was shot on the porch by a disgruntled client and staggered inside, only to drop dead on the stairwell. Winters now haunts the seventeenth step.

Of all the ghosts that are said to inhabit the Myrtles, Chloe is by far the most famous. Chloe was a house slave and the mistress of Judge Clark Woodruff. The Woodruff family resided in the house, and included the Judge, his wife Sarah Matilda, and their two daughters.

The story goes that Chloe was an habitual eavesdropper, frequently listening outside of doorways and spreading gossip. As punishment, Judge Woodruff ordered her left ear cut off. Chloe was then banished from the house. 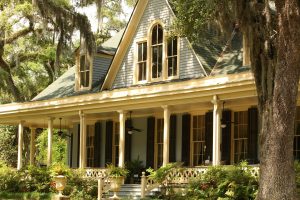 Attempting to reclaim her former position, Chloe baked a birthday cake for Sarah Matilda and her two daughters. But this cake contained poisonous oleander leaves. There are conflicting theories regarding Chloe’s motive. One is revenge, but many believe Chloe did not intend to kill anyone. Rather, she wanted to make the family sick so that she could heal them and regain her status.

But something went horribly wrong. Sarah Matilda and her daughters fell violently ill and died during the night. Fearful of their own safety, outraged slaves hung Chloe from a tree on the property and threw her body into the river.

“Sarah Matilda and her daughters fell violently ill and died during the night.”

Occurring in one night, these four deaths account for much of the Myrtles haunting. The little girls are active all over the house, and guests report hearing children crying. Chloe has been sighted in the house and on the grounds, and has even shown up as a shadowy figure in a photograph taken by the house’s current owner.

It is this photograph which caused my own interaction with Chloe. On a visit some years ago, I took the tour while my husband, a skeptic, drowsed in a rocking chair on the veranda. While I did not experience anything frightful during my tour, I did have a sense of being watched.

It was in the gift shop, after the tour, when I had my own ghostly encounter. Roused from his lackadaisical slumber, my husband accompanied me into the small shop, which appears to occupy the house’s former kitchen. It was a slow day at the Myrtles, and there were no other visitors about. In the shop were the clerk, my husband, and myself. On the counter near the register were reprints of the owner’s famous photo, which shows a shadowy outline of Chloe, standing atop the roof.

Picking up the postcard and handing it to my husband, I said, “See, this is the image of the ghost.”

Ever the skeptic, my husband looked at me like I was nuts and waved a dismissive hand. At this time I said to the clerk. “Don’t mind him. He doesn’t believe in ghosts.”

Lo and behold, at this exact moment a large book fell from a bookcase on the far wall. It was a heavy hardcover book, and it came down as though it was deliberately thrown, landing near my husband’s feet. The clerk and I exchanged startled glances. My husband didn’t say another word.

Patricia Bellomo is the author of the Louie Morelli mafia romance series. Books include Louie Morelli’s Mistress, Louie Morelli’s Daughter, Stella di Mare, and the award-winning The Prince of Mafia Princes. All books available at Amazon.com and on all ereaders.