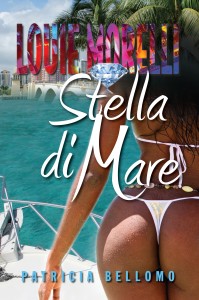 Tara Evans never planned on getting involved with a married man, but when Louie Morelli assumes control of the swank  Miami Beach hotel she works for, Tara falls hard for the charismatic mobster, rushing headlong into a hot affair. Things heat up after Louis discovers that the hotel’s former proprietor, Franco Santia, has been hustling hot diamonds.

Soon a rare gem–a magnificent “blue diamond” is uncovered. The diamond is Franco’s ticket to paradise, and he and his creepy pal, Manny, are desperate to get it back. After Manny accosts Tara, Louie “persuades” Franco to betray him. Then he devises a scam involving a famous filmmaker, an eccentric diamond dealer, a mysterious hit man, and his lovely lady, Tara.