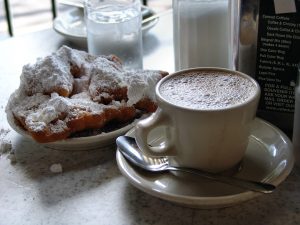 I’m in New Orleans visiting my daughter. No, not Stella, but my other little girl, the one I don’t talk about: Ceci, the lovechild I had with my late, longtime mistress, Mercedes.

Ceci’s more French than Italian, more Mercedes daughter than mine, but still, she’s my daughter, Daddy’s little girl. Ceci has her mother’s looks. She’s always been beautiful, now, on the verge of puberty, she’s stunning.

We’re at the Café Du Monde. It’s an old routine of ours—beignets and café au lait with the tourists. We sit street side because that’s where Ceci likes to sit. A rumble tumble jazz band is playing on Decatur Street, the same band as always. Beneath the canopy, the air is sluggish and humid. It’s midmorning and Ceci is supposed to be at school. She wears the uniform of the Sacred Heart Academy. I’ll deliver her to the uptown academy after our visit. At least, I’m expected to. But sometimes Ceci wants to play hooky. And I almost always let her. In fact, I say to her now, “Do you want to go to school or hang with Victor and me all day?”

“Do you want to go to school or hang with Victor and me all day?”

Ceci looks beyond me, to where Victor and one of Anthony’s men are idling near the entrance. Victor’s wearing a lavender linen jacket, one side weighted with his Beretta. I have enemies in New Orleans, my hometown. Not that I’m particularly concerned about being gunned down at the Café du Monde, but still, old habits die hard. It’s best to be prepared.

Ceci considers my question. Her mouth is dusted with powdered sugar. She says, “Will I see Uncle Anthony, too?”

“Yes, and the mayor. Your remember Mayor Blakely, don’t you?”

“Of course.” Ceci’s twelve going on thirty. Daddy’s little girl has never really been a child. She was born gifted—the type of child who reads Tarot cards and plays with voodoo dolls.

Ceci tilts her head, looking at me. “I want to stay with you,” she says.

Patricia Bellomo is the author of the “Louie Morelli” series. Books include The Prince of Mafia Princes, Louie Morelli’s Mistress, Stella di Mare, and Louie Morelli’s Daughter. Books available at Amazon.com. Also in digital format for all e-readers.